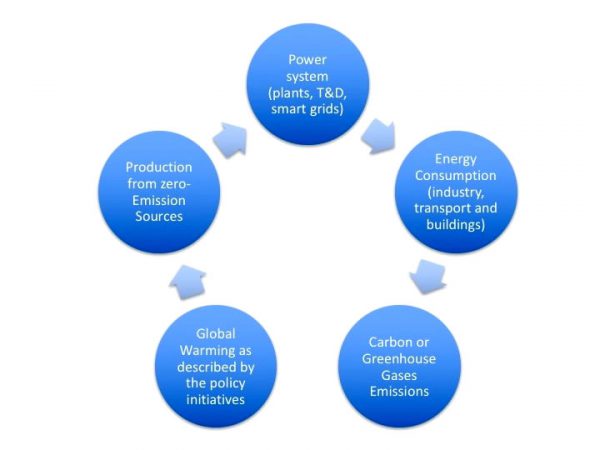 Using Global Change Assessment Model (GCAM), policy makers are facilitated to take informed decisions on future carbon emissions. GCAM [1, 2] is an open source, market equilibrium model that simulates climate change related emissions in a cyclical pattern, as far as information is concerned, as depicted to figure 1. Each of the cycles explains the situation in a given time slot. The information of the previous cycle provides the data for the following step, up to point where prediction is inaccurate, a factor to be specified by the user who reads the results.
GCAM observes limitations that are geographically expressed, as well as, policy and technology oriented. The input data include a wide selection of information on sectors contributing to carbon emissions including: industry, transport, energy, and agricultural activities. These input data are aggregated to geographical regions based on socioeconomic criteria such as active population, and gross domestic product. The geographical regions are valuable for simulations on global level but the resolution expressed in continents or wide geographical regions limits the capabilities of country level specific results.

Our achieved milestones:
GCAM team, up to now intensified the contribution of hydrogen as fuel in meeting the future emission scenarios, as they were described under the expected Represented Concentration Pathways. As a matter of fact, our contribution is transparently connected to the efficiency of the technology per se. Therefore, it is assumed that technology advances its efficiency in different rates across time.
More info is available on: ResearchGate

Input Datasets
The model can project information in 5 years’ intervals up to 2100. This projection is based on the input data from the years 1990, 2005 and 2010. Input data require to be consistent and accurate. Having this said, they have to include the above-mentioned information, organized in two main datasets, the energy system considerations that contain the bulk amount of emissions and the socioeconomic data, which provide the foundations in understanding the contribution of each sector.

Socioeconomics and other data
Socioeconomics dataset includes macro-economic, agriculture and land-use considerations. The above affect considerably the results of the model, on a variety of matters and as such are considered as necessary. Macro-economic information displays active population, job participation, country level gross domestic product and its expected growth. The capability of the population to produce provides wealth to the country and affects carbon emissions if it is served energetically by fossil fuels.
Agricultural sector is considered to the degree it affects emissions as a factor of absorbing carbon and producing it. Forestry sector provides the raw material for biomass energy production and arable land competes for land use with space demanding renewables, for example solar.